Apologies for the delay in getting an update out. It's been a bit of a rollercoaster here for the last little while.

But I've done some painting. And I even played a game this past weekend--Warmaster of course. :) Although we found that we were getting bogged down by the close combat, so we'll be trying out using the Hail Caesar rules to play with our Warmaster toys some time in the near future.

I thought to take some photos of the early stages of the Warmaster Undead, but didn't take the middle stage with the unlacquered bases. So here are some initial shots... these are the strips all painted and about to be based. 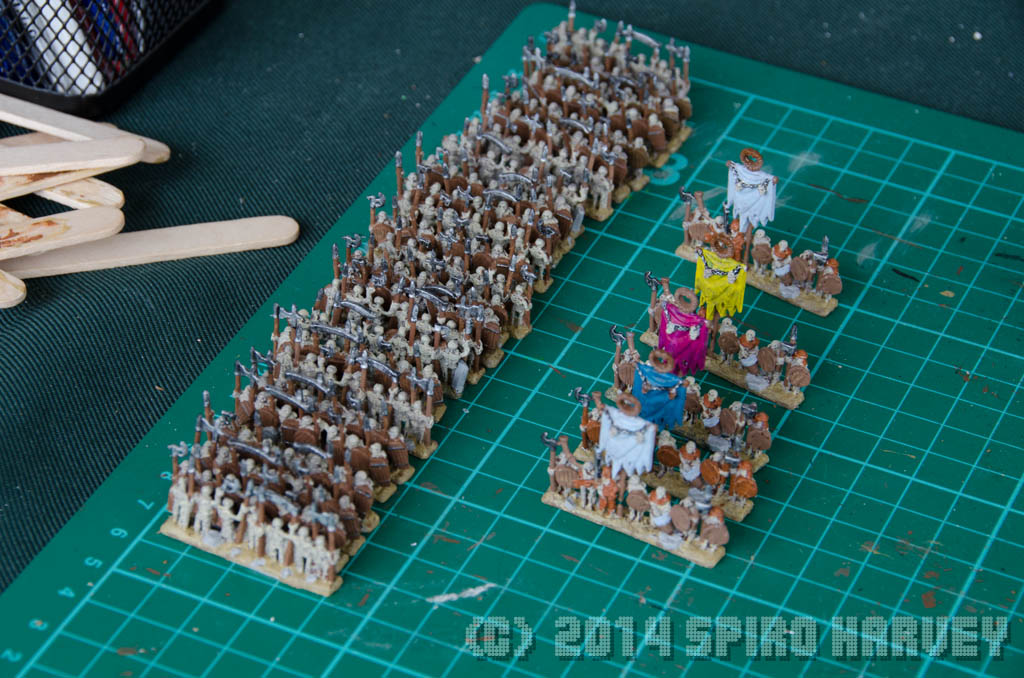 Wider shot of my table: 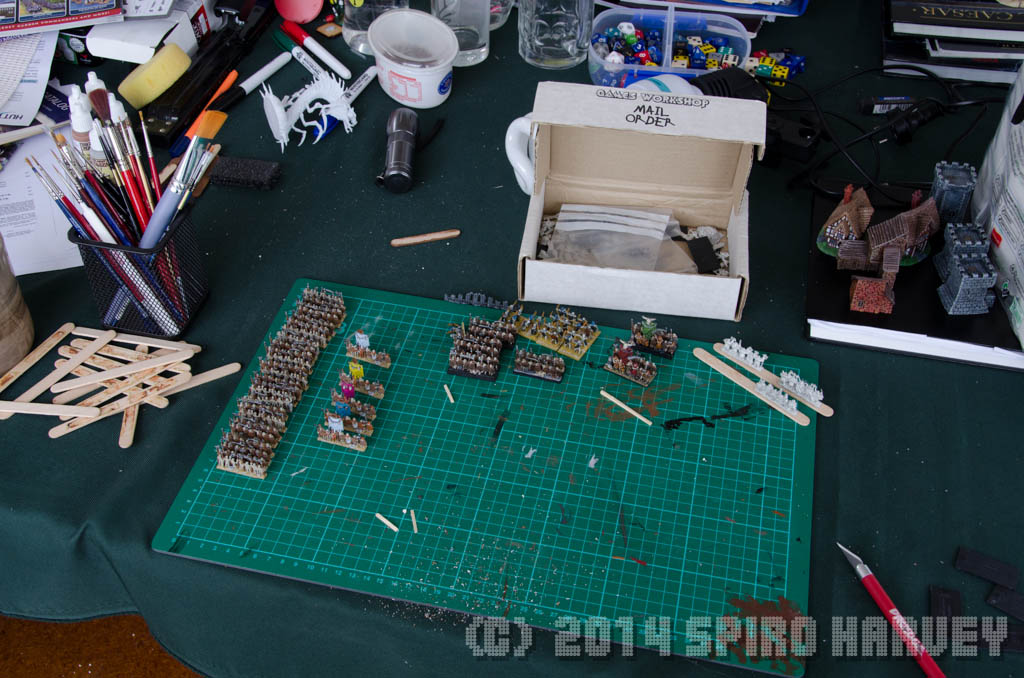 The following pic is them on their bases: 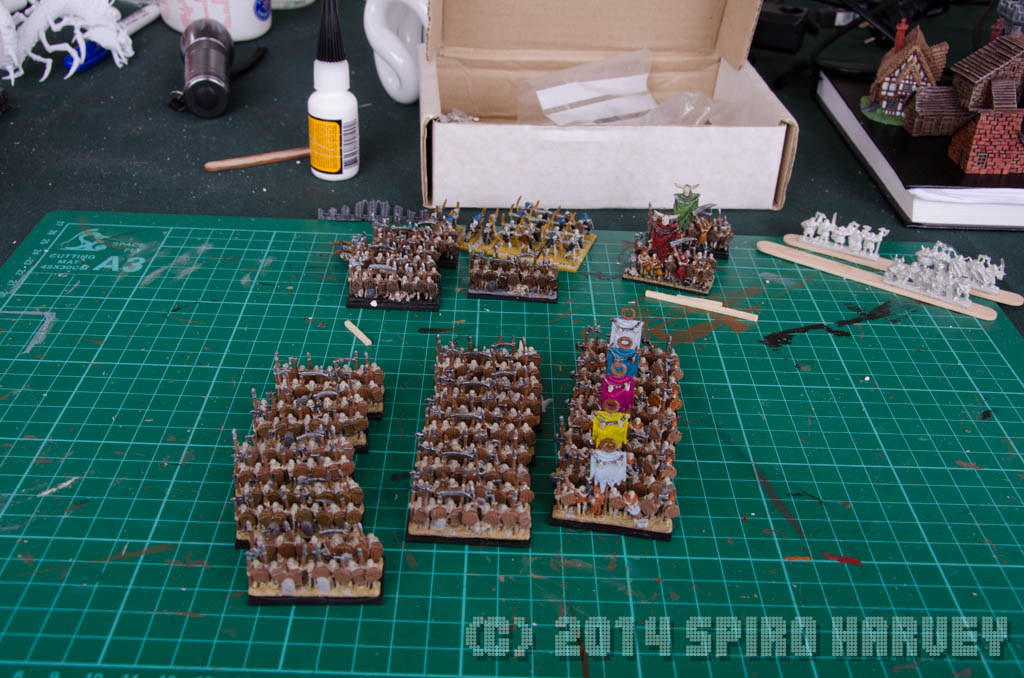 I shot these in the order that I did things, so after basing the Undead, I finished off all the buildings I was working on, so these are completed now, and were varnished with Army Painter Matt Spray Varnish. I really like it. For the last couple of years I have been using paint-on varnish such as the Liquitex matte, and that's really time consuming.  The army painter spray is fantastic, and I'm really happy with the results. There's no hint that a coat is over the top of the models, and it's a fairly solid coat that withstood a light scratch test. 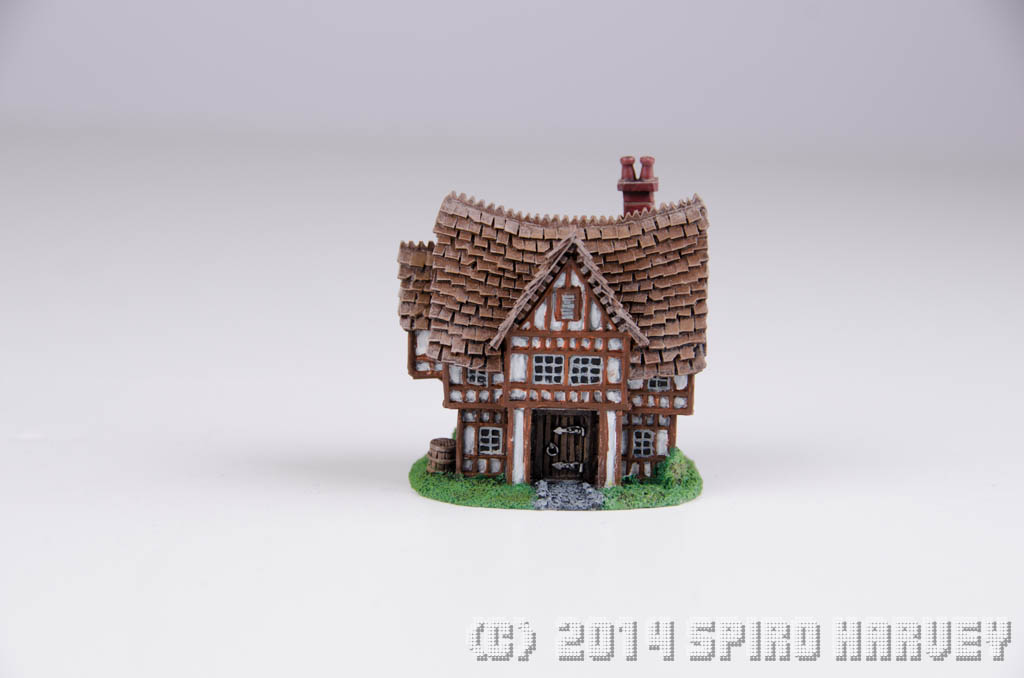 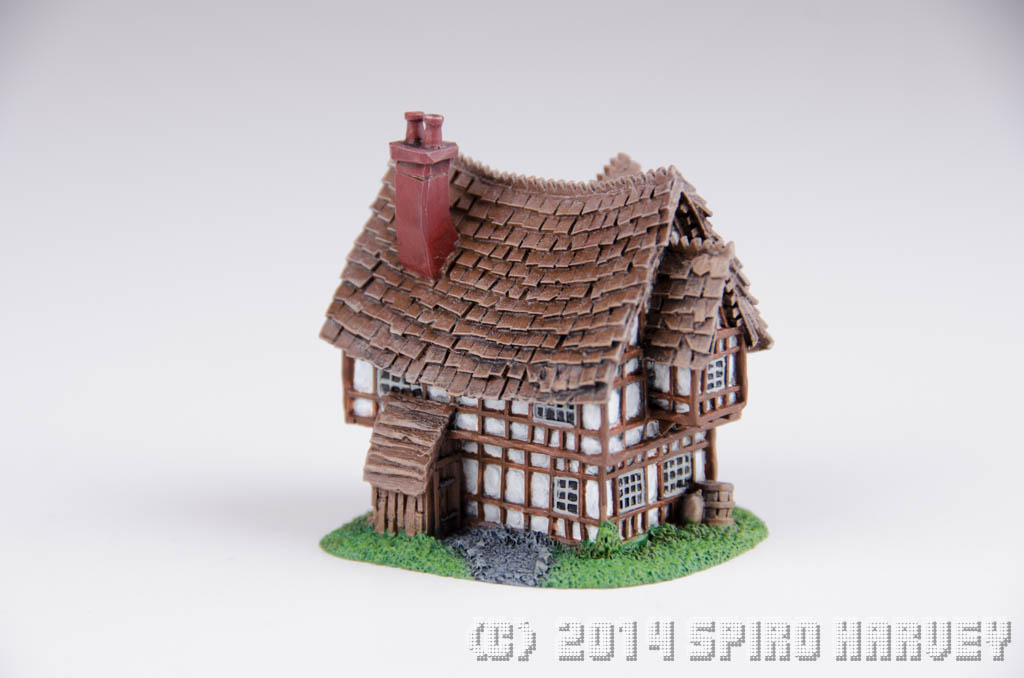 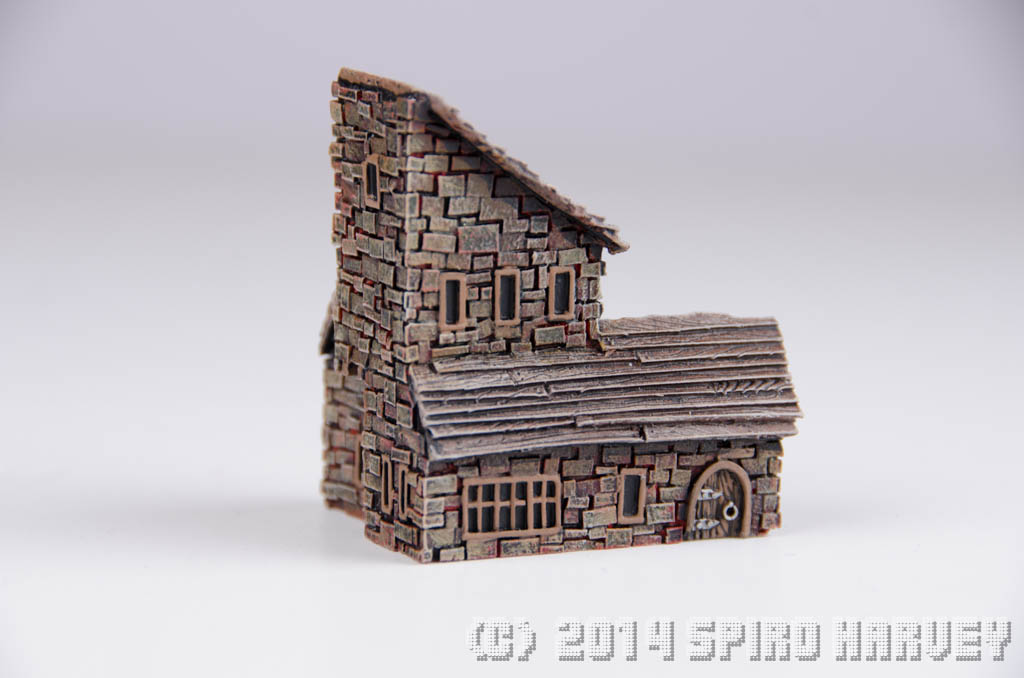 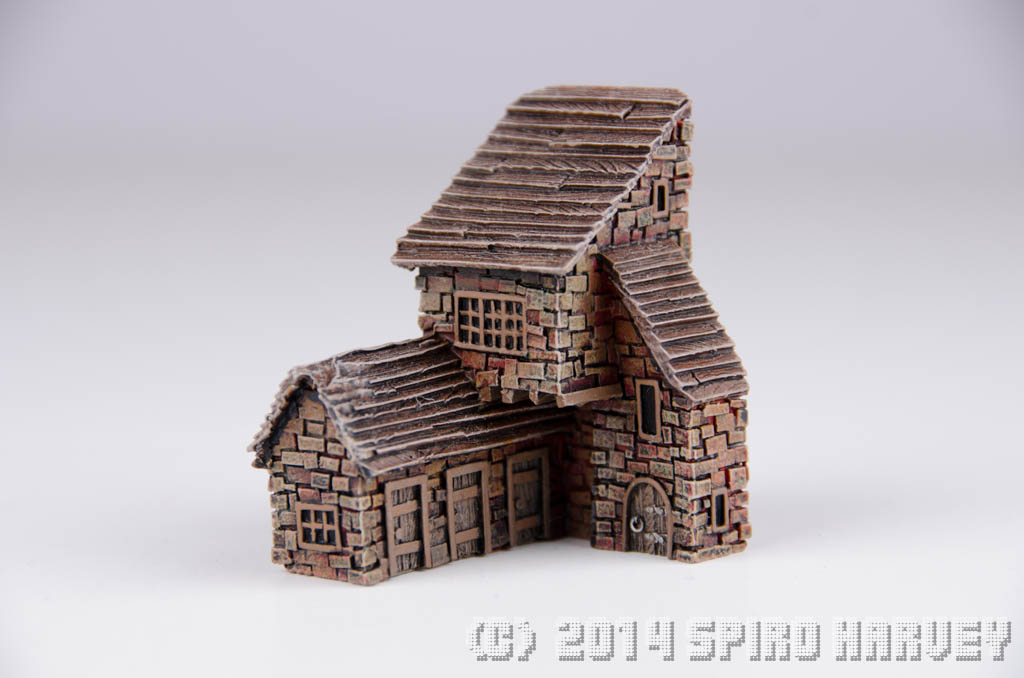 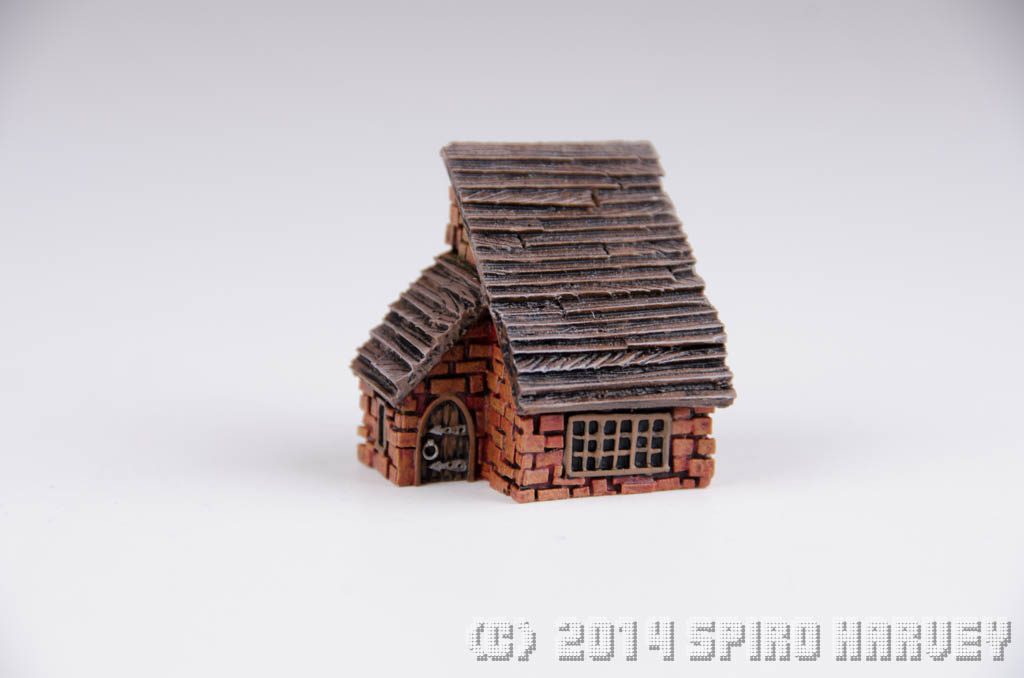 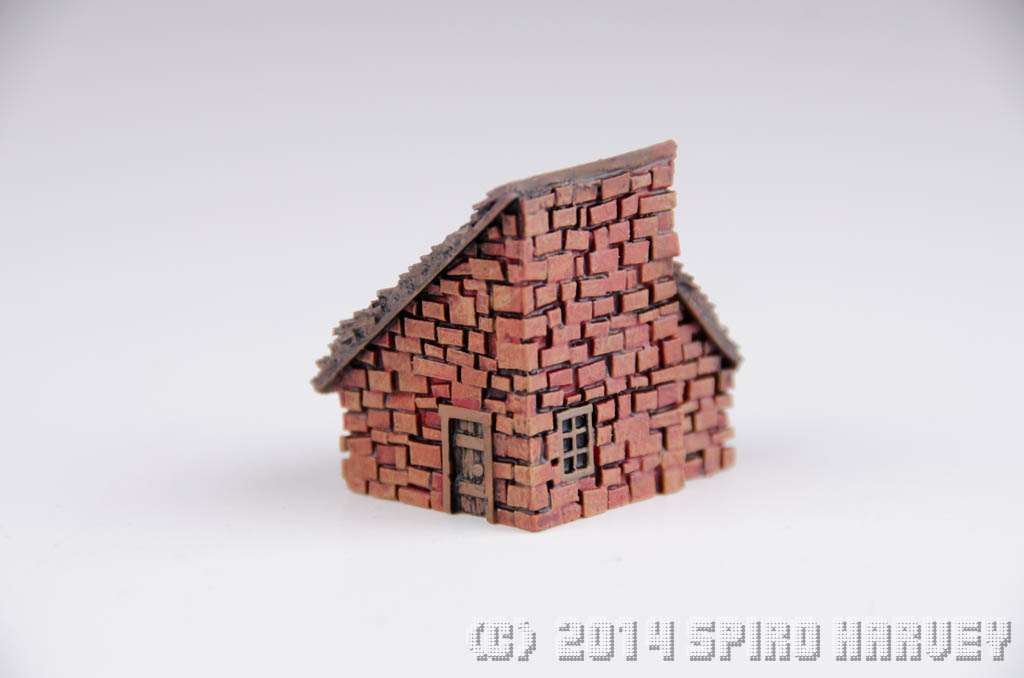 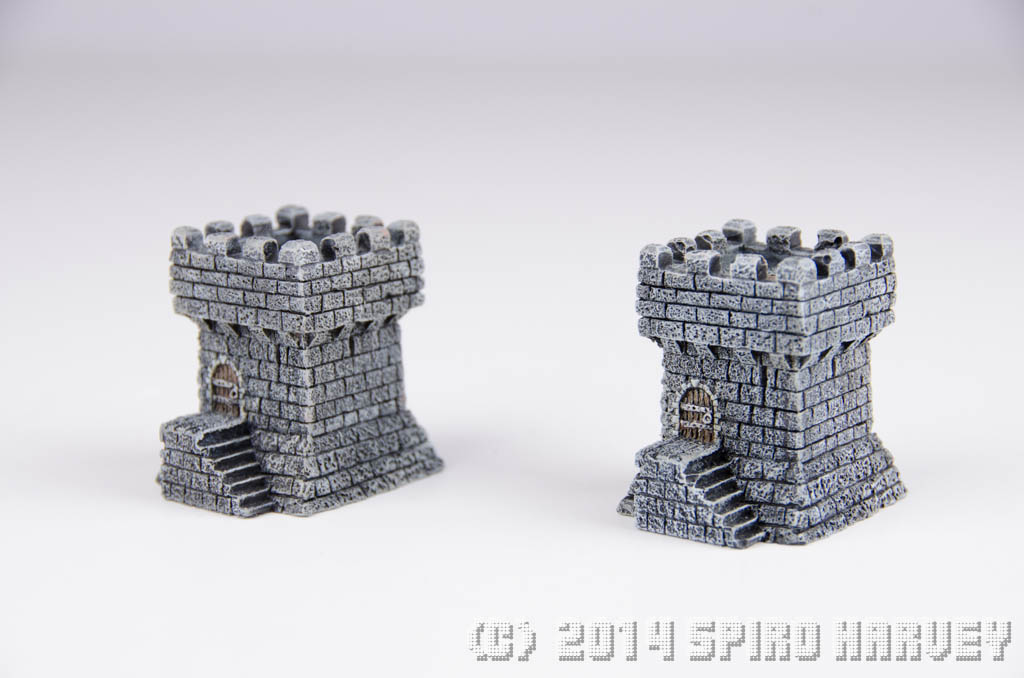 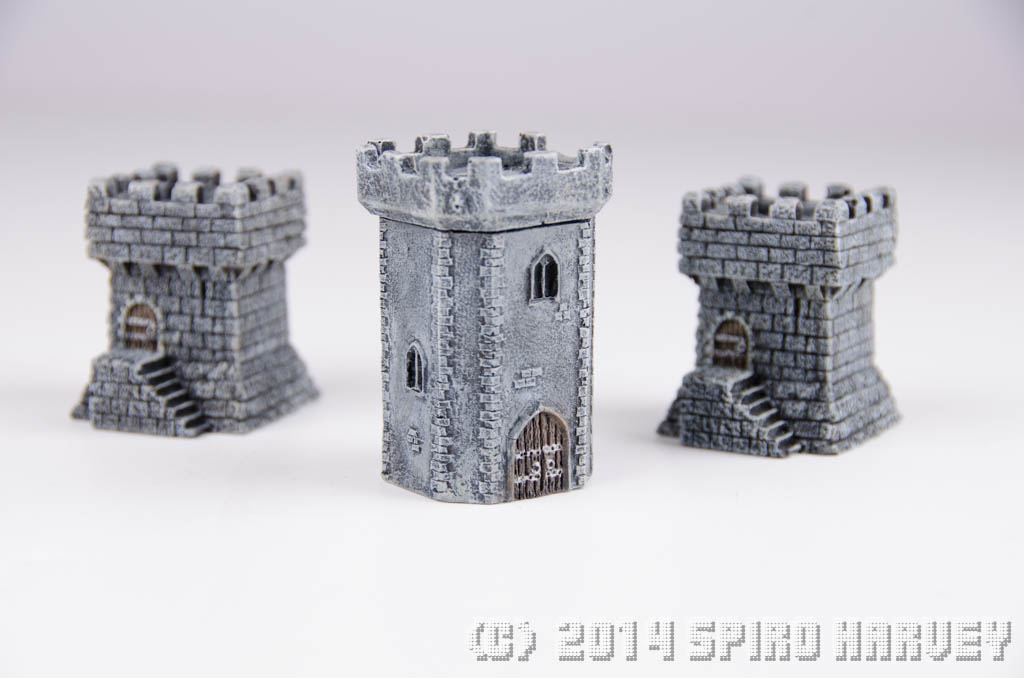 Then I took a minor detour and glued my 15mm Romans onto cardboard. You can see the strip of thin plasticard that the models and grass are glued onto, but I felt that they were too thin. I wanted to buy some MDF bases, but I don't have any money at the moment, and have no shortage of cardboard. :) My plan is to PVA the sides so they're flat, and paint over them. Hopefully that will turn out OK. 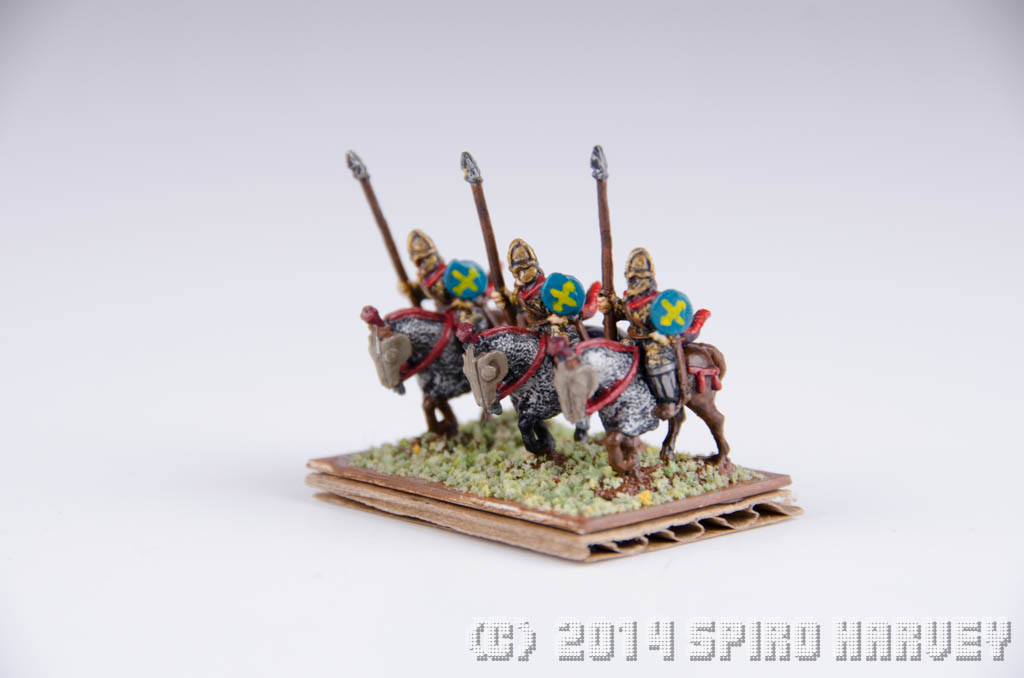 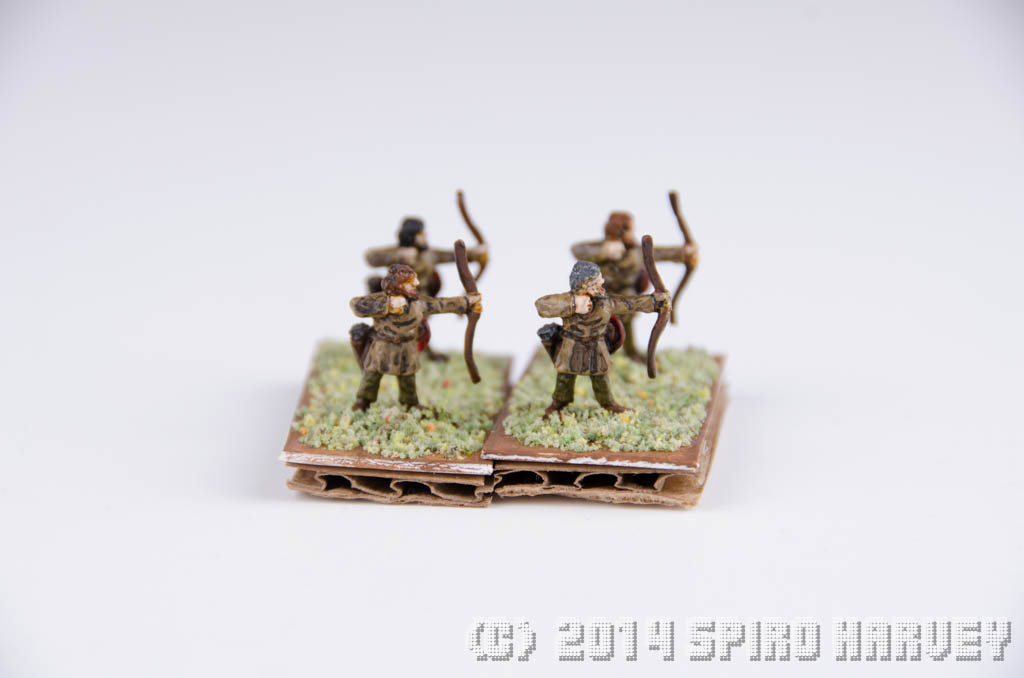 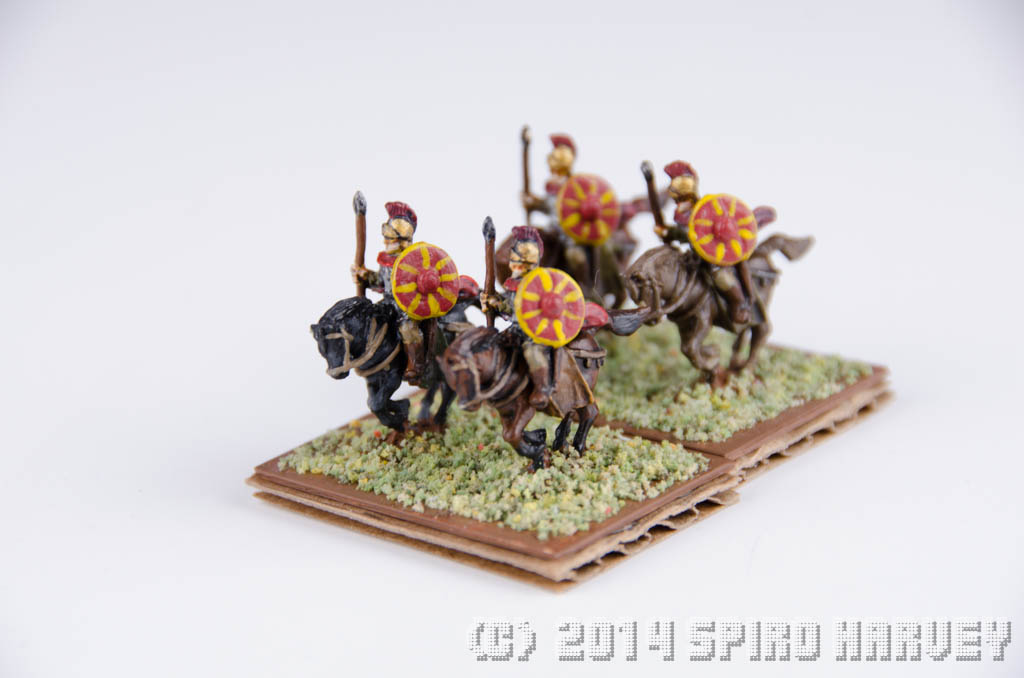 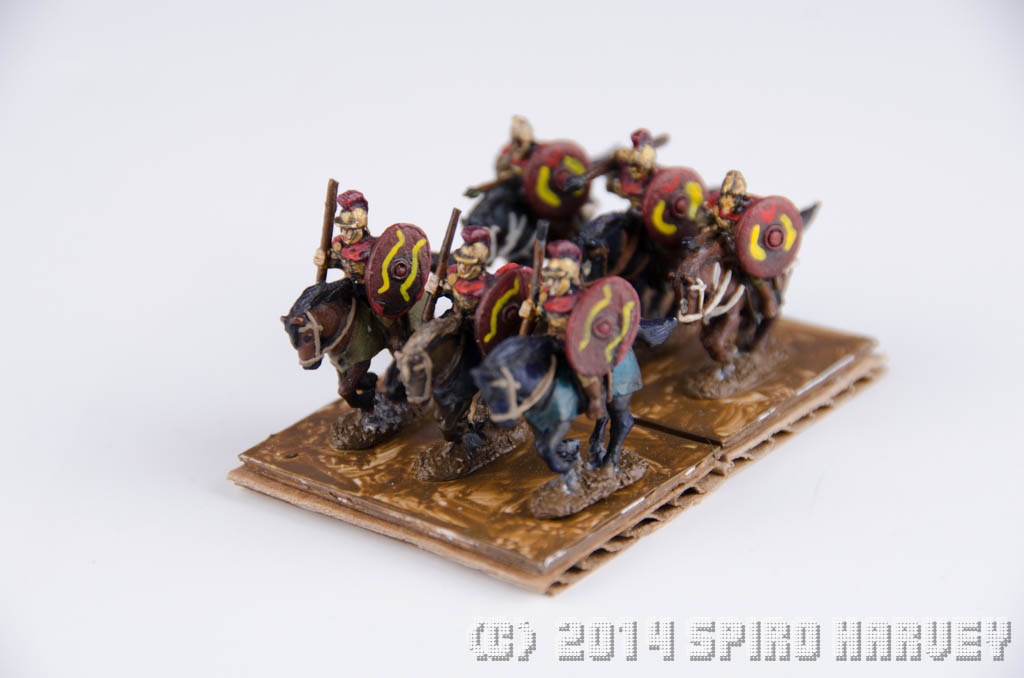 And then I got to finishing the Undead. Got a day at home where the weather was good enough to open a window. I tell you what, even then I had to do it in batches because that lacquer is STRONG!

Unfortunately, it's a gloss lacquer, so they are too really shiny, which I think ruins the dusty old bone look. I have sprayed over one stand with the Army Painter Matt spray, but I left it in the garage, so haven't had a look at it yet to see if it has given a good effect. 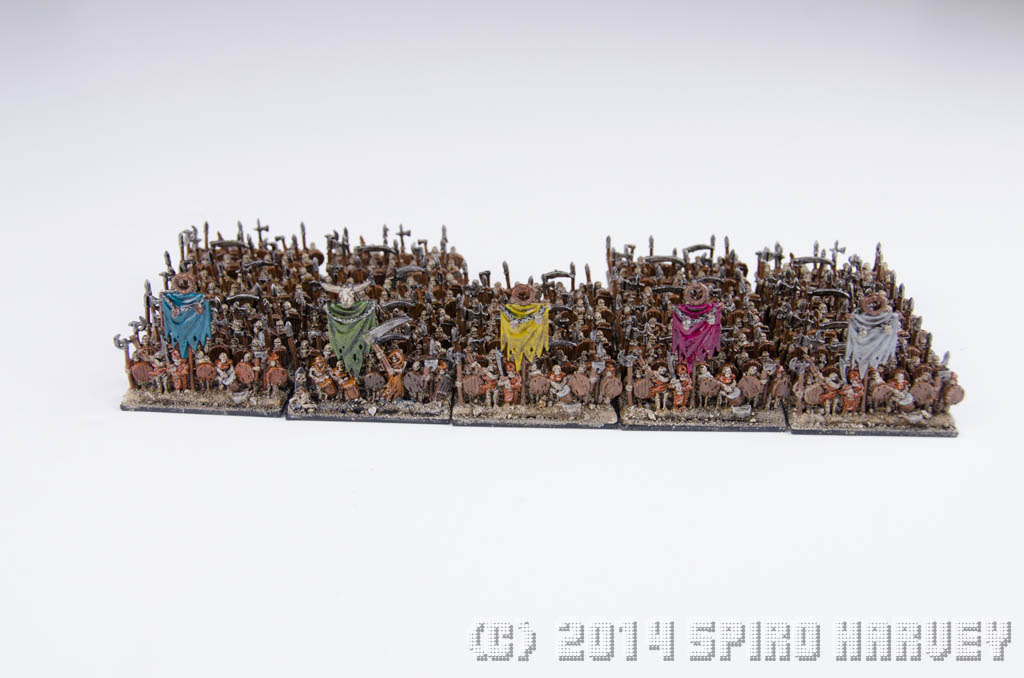 I have been looking for some basing material with a bit more inconsistency, as all the grit I have are all the same. So I opted for buying some clay kitty litter, and grinding it up with a mortar and pestle. It looked reasonably good, and I actually put a layer of matt spray varnish over each of them, hoping to keep it all bound to the bases. But no such luck, once I started applying the final lacquer, it all started coming off on the brush. Not so noticeable here or from the table... 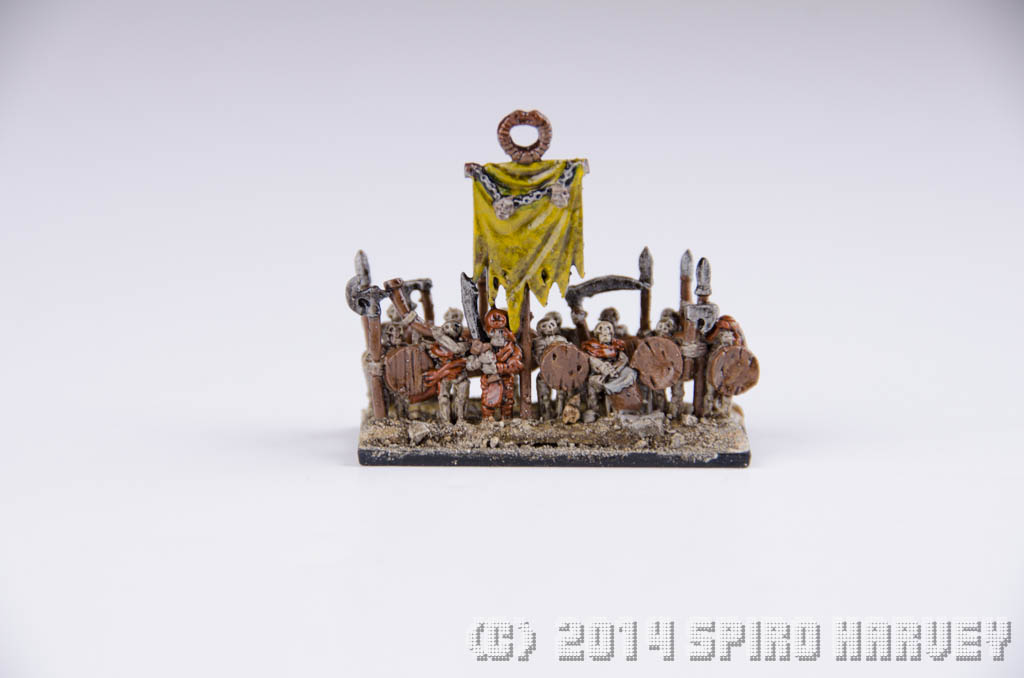 But you can certainly notice once I zoom in. :( 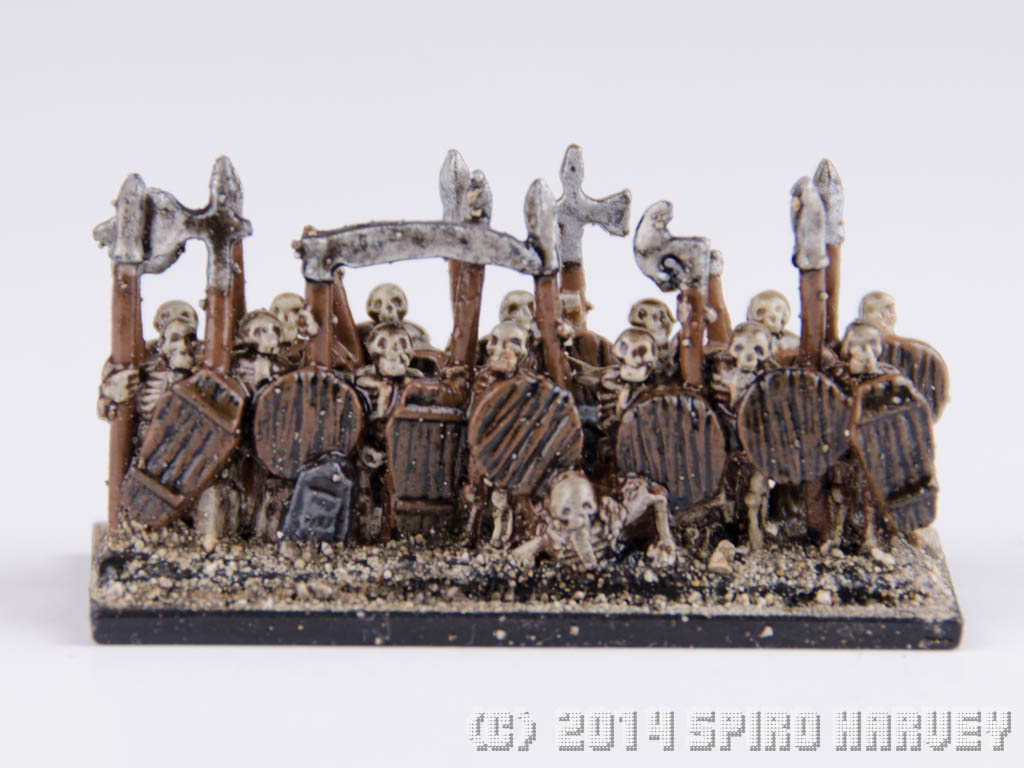 All in all, I actually don't like the way they turned out. They're too dark, and I'm not sure how I'd approach the next batch. I was looking for a way to make them quick and easy to paint, and they were anything but. I still had to fiddle around with painting the weapons, the shields, and the cloaks, and brushing on the lacquer was time consuming because I was being careful not to disturb the basing material. Which as you can see, I completely failed at.

So I think next time I will just stick to my old method of painting them and drybrushing the bone and the shields, and painting highlights onto the banners and cloaks. Then I can just do a spray coat of varnish and be done with it. And I'm not sure what I'll use in place of the kitty litter, as I think that was a major part of why I didn't like the result.

Either way, I hope you enjoyed the pictures, and I will get on to doing more soon. I have a Sphinx, a Bone Giant, some cavalry, and a whole lot of chariots to finish. Oh and some archers I have to rebase.
Posted by Spiro Dotgeek at 21:16