A couple of weeks ago, there was a big flood of excitement about an announcement made by an Australian Games Workshop store, in that they were planning on creating a new specialist games studio attached to Forgeworld. I won't reiterate all the details, as you either already know by now, or you can find it by Googling.

My instant reaction was that if true, it wouldn't last long. Games Workshop have rebooted the specialist game lines several times, but each time it's just a limited thing. And this, post Age of Sigmar, feels like it's just a cash grab. I feel like maybe they're getting desperate to introduce some cashflow.

It's glaringly obvious that Games Workshop are no longer a games company. They are an Intellectual Property (IP) company whose only goal is to make money for their shareholders. Sure, that's what business is about, but it feels like this is what a great many companies are now. The product is incidental, and totally irrelevant. They are cash machines for their shareholders.

So what does an IP company, who are driven only by profits do when they practically annihilate one of their two core products? And I say annihilate purposefully. They need find another source of revenue. Sure they could create new games, but they're not a games company any more. And on top of that, most of the creative people who created all that IP have left and started their own companies such as Warlord and Mantic.

The previous CEO of Games Workshop, Tom Kirby, blatantly admitted publicly that he didn't care what the fans wanted. His goal, of course, was to make money--and as CEO and a shareholder, he had to secure his million dollar annual dividends.

Take note in that document that in the 2014-2015 financial year, GW dividends were paying 52 pence per share. So Mr Kirby pocketed a tidy £1,096,498 on top of his very considerable salary.

So what would I do if I were in GW's shoes, after having destroyed one of their primary sources of income, and watching people (who I had previously admitted I didn't care about) switching over to a competitor's product? Namely Kings of War. Of course, I would go through my extensive catalogue of IP. I would dredge up all those games that many many people around the world love dearly (even though I don't care what they think), and I would dump them on the market again for 6 months, make some more cash, secure next year's dividend, and then reassess in a year's time whether the company was still profitable enough for me to hold onto those 2 million shares, or whether I should cut and run.

It's telling that several sources have quoted the specialist games re-release as a "long term investment" of six months or more. Before reading that I picked that this would last 6-8 months. They'll produce new miniatures, there'll be a surge of excited buying which will dwindle over a couple of months, and then hobbyists will relax comfortable in the assumption that they will be able to buy these games/miniatures at their leisure, GW will see they're not making the sort of profitable returns in the timeframes they were hoping for, and after another couple of months, they'll drop the lines, or at least significantly reduce them.

It doesn't seem to have crossed the current board's minds that the reason many people love their IP, and why they become loyal fans in the first place, is because of the games. Modern GW appears to believe it's just a premium miniature manufacturer, not a games company. Hell, they're even changing the names of their stores from Games Workshop stores to Warhammer stores. It's all about the IP.

The miniatures. The immediate sales. Where longevity is six months.

They don't care about those hobbyists who have been loyal for decades because old fans are not buying miniatures right now. They don't care about people playing their games. It boggles my mind because people playing games are helping to sell miniatures, even if they're not always buying miniatures every week themselves. A hobbyist who plays a game, is loyal to a game, pushes the game among their friends, and plays the game at clubs and tournaments, is part of the support network. He or she is helping build the community that new players need. If a game isn't being played by a community of loyal fans, then it's hard for new players to be introduced to that game, and hence, sales in that area will be lower or non-existent.

If people here in my town all shift to Kings of War at the tournaments and the clubs, then new players interested in miniature wargames are less likely to choose miniatures from a game not being played. They will see gamers playing Kings of War, and they will see the KoW books and miniatures, and they will have the merits of KoW expounded by all the local KoW gamers.

Where will Games Workshop be in all of this?

I don't see how a company that has historically been a games company, with the word GAMES in their name, and who sell miniatures for warGAMES, can just leave the games and the gamers behind. I don't see how they can continue to be successful when they don't care about nurturing and maintaining the loyalty of long-time fans. "Long-time" in the real sense of the word, not in the annual financial forecast sense.

And it really doesn't inspire me with confidence that they will successfully support yet another re-release of their specialist games. My prediction is that GW will produce some miniatures, put them up for sale, not support them or the games in any way, shape, or form, be underwhelmed by the profits, and dump them soon afterward.

What is my stake in this?


There are a great many specialist games that I've loved over the years. But I don't love what the company has become. I refuse to support a company that doesn't care about their most loyal fans... you know, the people who ensured that Mr Kirby is getting his million pound dividends now. They would be nothing without those loyal fans.

And besides that, with so many companies now producing quality miniatures, it's possible for me to buy 10mm fantasy miniatures from other manufacturers like Pendraken, Kallistra, Magister Militum, Eureka, and others, there's no need to buy Warmaster minis from GW.

And if I want to play a 6mm science fiction wargame, I have an even larger range of options, such as Plasmablast Games, Angel Barracks, Microworld, Onslaught Minis, Brigade Models, Darkest Star, Dark Realm Miniatures, just to name a few! Many of which can be had for a fraction of the cost of Games Workshop's "premium" prices.

For 28mm games such as Mordheim and Necromunda, well, there's no shortage of manufacturers there. In fact, you can even get many games for free online.

Start doing some hunting if you haven't already, find a new game, find some cheaper miniatures, and start playing it at your local club. If other gamers see people playing more games and not just one or two overpriced "premium" games, they will be inspired by the hobby. Or you may be able to rekindle that flame in old grognards in ways that Games Workshop haven't been able to.

Ultimately, I think these alleged specialist games re-releases are too little too late. We're at a point in time where their irrelevancy has never been greater. Gamers have so many options for miniatures and wargames now, at any scale they care to choose, that GW's announcement is just laughable to me.

So to answer the question in the title--What's in store from GW's new specialist games studio?

I've taken on another commission, this time painting 20mm British forces from the American War of Independence. The lot here on the painting table are probably about an 8th of what I may end up painting for the owner.

From a quick search on Plastic Soldier Review, these look to be the IMEX British Redcoats. Although, I'm not sure what happened because the owner doesn't have any of the standard bearers. So there are some of these models that I am going to drill out the rifles and replace with brass rods, which he will add standards to later. 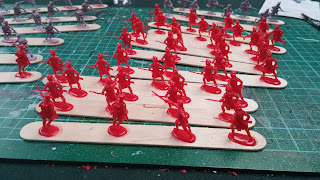 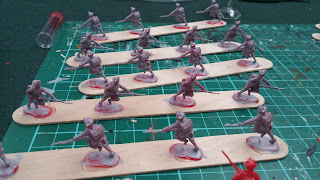 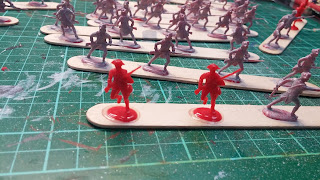 The unpainted models here are the ones that will be converted to standard bearers. 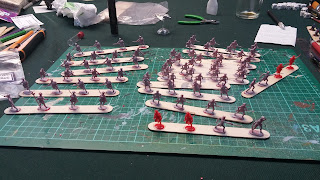 I'm amazed that they didn't need washing before taking paint. I used very thin primer designed for airbrushes at this scale, so it will take a couple of coats, but it's great because this undercoat allows all the detail of the models to come through--especially important for me at this scale.

I was a bit worried because some 1/72 plastic miniatures I've painted before have been so heavily coated in oil that I ended up resorting to the very thick GW Foundation paints. Very glad these took the thin paint so well.

More to come as I progress.

Posted by Spiro Dotgeek at 20:26 No comments:

This is my latest Youtube video, which has an unboxing of Battlesystems' 28mm cardboard modular terrain, plus we build some of it up, and unbox GMT Games' Genesis.


Other than that, I recently finished a commission for some 15mm Aliens models (74 of them in total), which I'll get photos of soon and post up, but that's bumped up my high score for the year, and it's been a while since that was updated.

Thanks for checking this out, and sorry I have been lax in posting over the last few months. It's coming up to summer now, so the garage is warm enough for me to sit in.

Please subscribe here and/or my Youtube channel if you like what you see. The Youtube channel will definitely be getting many more videos over the summer break--yes it's coming up to summer in the southern hemisphere. :) There are many other videos on my Youtube channel that don't get posted here, so I encourage you to check them out too. The link is here:

One final note, please check out my friend Mark. He has a long running blog called Kiwi Colour Studio, which is fantastic (he's a brilliant painter), and he's recently started a new blog called The American Civil War in Miniature. This is a period I've always wanted to start gaming in, so maybe now with his inspiration I might get motivated. Even if you're not into that period specifically, he's got some incredible minis that will inspire you, plus he recently did a series on making cornfield terrain. It's really good stuff and well worth checking out.

Posted by Spiro Dotgeek at 09:21 No comments: