Playtesting one of my board games

My friend Dave recently bought Battlesystems' modular cardboard terrain (see the unboxing video on my Youtube channel) and we were hankering to play a game using it. While cleaning out some boxes in the garage I found some notes and test cards for a board game I started developing a year or two ago. It's called Spacejunk: The Forsaken™ and it's a sci-fi game set in my Freejacks™ universe, in which players fight to take control of starships or space stations. One player acts as Game Master (like in a roleplaying game) and the other players take on the role of characters fighting their way through their missions.

The game is a bit of fun that includes rampaging robots, enemies that teleport next to players in the hopes of stopping them from achieving their goals, and waves and waves of spawning enemies.

So we grabbed a few random miniatures I had lying around, gave Dave a mission to shut down a computer allegedly being used to run experiments on mutating captured sentient beings, and he went at it.

Because the mechanics are still in note form, we played with a few ideas back and forth during the game, so there was no real consistency between turns, but I think that it's progressing well. And most importantly we had a lot of fun playing it, so it's a winner already. Not that I'm biased or anything. :)

So here are some photos of the day's excitement. 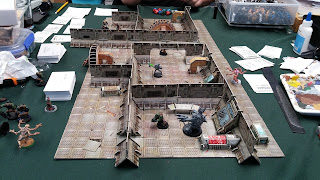 An overview of the board. 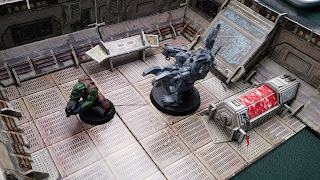 The red glowing thing is the experiment chamber and the computer console is what is used to turn it off. 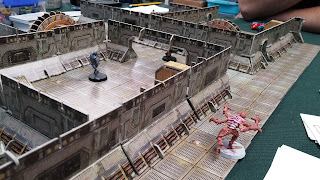 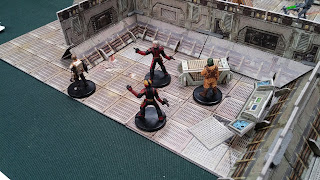 The four characters in their starting location. 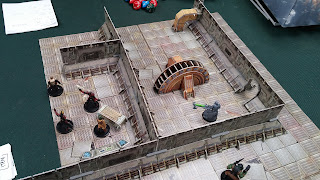 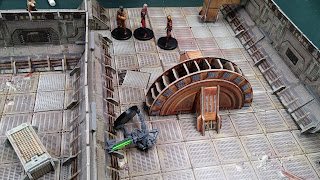 Their first successful kill was to take out this killer robot. 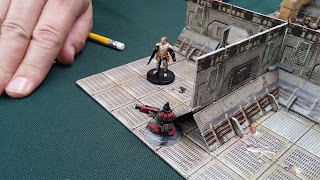 Thanks to spawning enemies, this little guy appeared in a room behind them and tried to surprise them from behind. 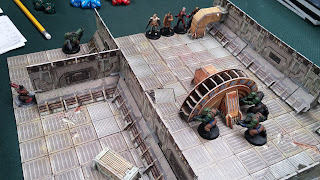 More spawning enemies appeared while the characters huddled down the far end near some cover, healing up some wounds and readying themselves for the next assault. 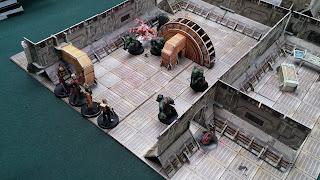 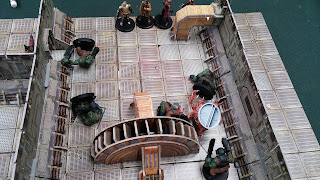 And they do pretty well. 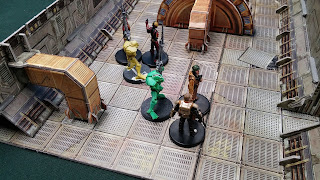 Surprise! I drew a couple of robots as teleporting enemies that appeared right behind our heroes. 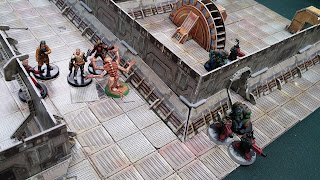 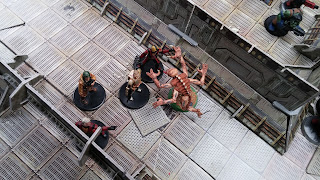 A vicious critter with more teeth and razor sharp claws than your mother-in-law attacks the characters. 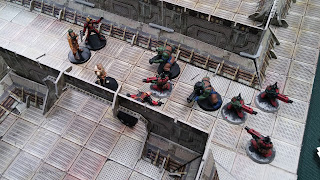 And we have our first casualty. 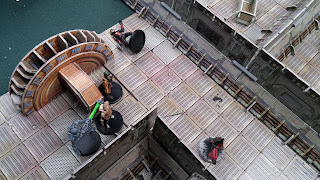 Oh, and look at that. Our second casualty only moments later. 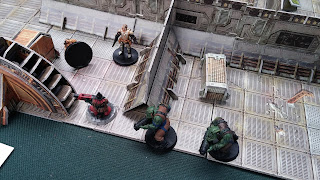 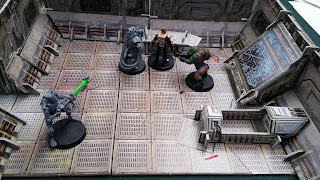 One guy left, he manages to take out the big boss, and while bleeding profusely and depleted energy shields, he makes one last ditch effort to turn off the machine and make a run for it. 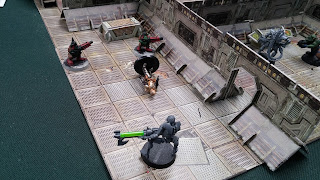 But he doesn't get very far unfortunately.

One of the options I have playtested with others (but not this time around) was the ability for players to respawn by sacrificing an item, or paying a cost. The game is set in the far far future and there is nanotechnology that can resuscitate or heal people very easily. When we first played it though, we had the unconscious/dead character be automatically teleported back to their ship for revival, but this meant that the players had to fight through more baddies to get back to their teammates and this could take a while on a long map--assuming they even made it alive.

So that's one aspect I want to address. I don't want to have infinite revivals, otherwise the players will just keep going back and it'll get pretty tedious, and they'll always win if they keep at it long enough, so there has to be some limit. Even though technology is sufficiently advanced to allow it, doesn't mean they'll be able to afford it.

I'm exciting to keep working on this now as the Battlesystems terrain makes it look so much nicer than my cut out sheets of grid paper.

I have another game in the works, which is a hex/counter wargame, also based in the same science fiction Freejacks universe and that game is far closer to completion. To the point where I have international playtesters.. well, one in Canada. :)

More on that another day.