[VIDEO] What could we expect from GW's Specialist Games in 2017?

In this video I analyse what's out and what could be coming out in the future for Games Workshop and their Specialist Games line.

Posted by Spiro Dotgeek at 10:17 No comments:

[VIDEO] Is this the Golden Age of wargaming?

I made a Youtube video where I talk a bit (a lot) about the current era of wargaming and what it means to me.


I will try and do more discussion videos like this in the future too, so stay tuned and subscribe to see more there.
Posted by Spiro Dotgeek at 19:37 No comments:

Blood Bowl Games and a Review of 5th Edition

(scroll down past the pics for a review)

It started last week when my good friend Grant succumbed to the tricksy wiles of a games salesman at a Bring-and-Buy table. Grant ended up buying a cheap copy of Blood Bowl, which I think was the 4th release--I won't call it 4th edition because The Marketing Team(TM) will probably just insist on it being called Blood Bowl, and because the game hadn't changed (and still hasn't--mostly, I'll get to that).

So anyway, we set it up and went to start reading through the rulebook to play. It's been a while and so naturally we forgot all the rules, and I myself have never owned a copy, having just played with a few friends over the years. But it had been a long, long while. As we were rolling our first dice to determine kickoff order, a nice chap (we'll call him Al), who was a super, super, hardcore Blood Bowl fan (was? nay, is) rocked up, eyes all aglint, and helped us play through our game. Al remembered every rule and every stat from every team, and if I'm honest, is quite probably the reason I won the game.

Credit where credit's due. Thanks Al. :)

The teams were Ogres with snotlings (with Grant as coach), vs Undead (coached by myself).

I didn't take notes throughout, so here are just some highlights of the game. This was the first time I took down one of the ogres: 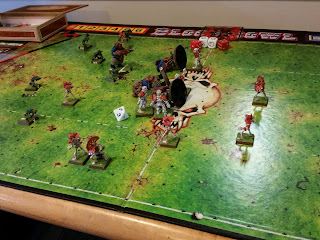