In my last post I talked about the Shieldmaidens I 3D printed for Ragnarok.

Well, those two figures are almost done. They were done, but I went overboard on the Army Painter Strong Tone so they're a bit too dark. Maybe I'll rework them and bring out the highlights or maybe I'll just use them as a learning experience for the next batch. There are 6 or 7 more that I've printed and glued together, plus a couple of others that need reprints of weapons or shields. 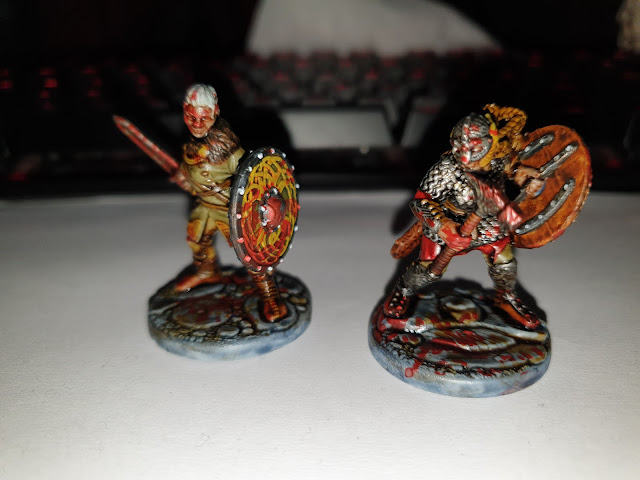 I know, I really have to get some better lighting. It's been a long time since I've done any photography, so these are just taken with my cellphone under my painting lamp.

The majority of these minis were painted with Contrast paints, but I found the fur over the helmetless lass was just too muted. So I added a bunch of white speckling and painted over it with a darker Contrast paint. 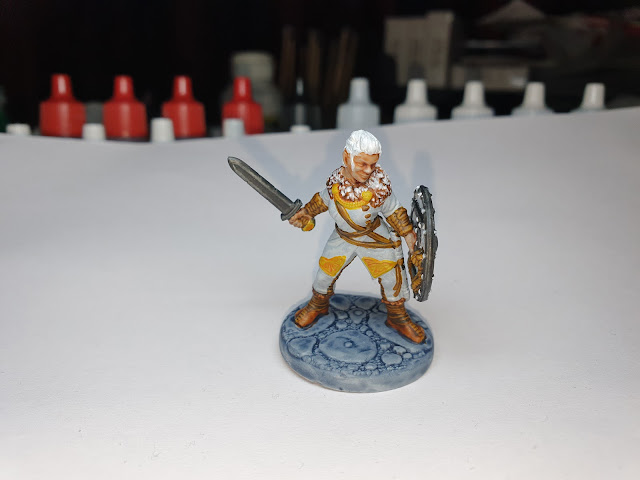 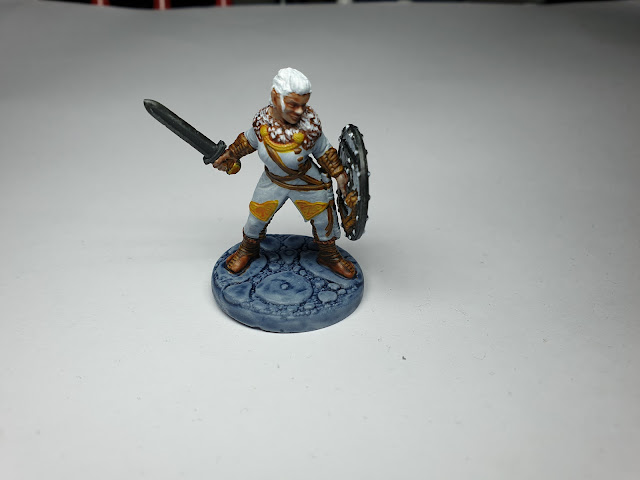 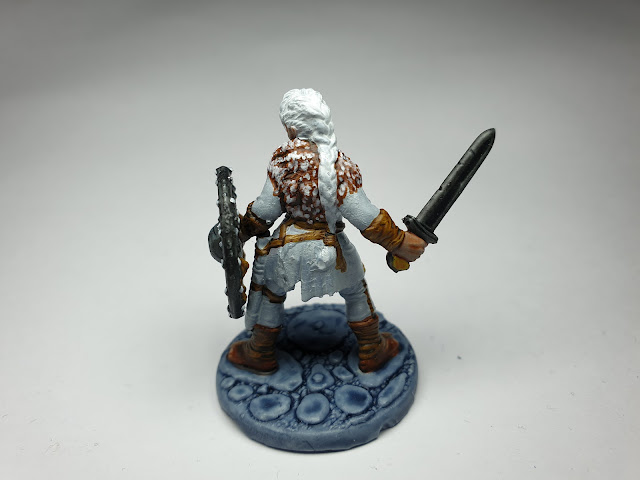 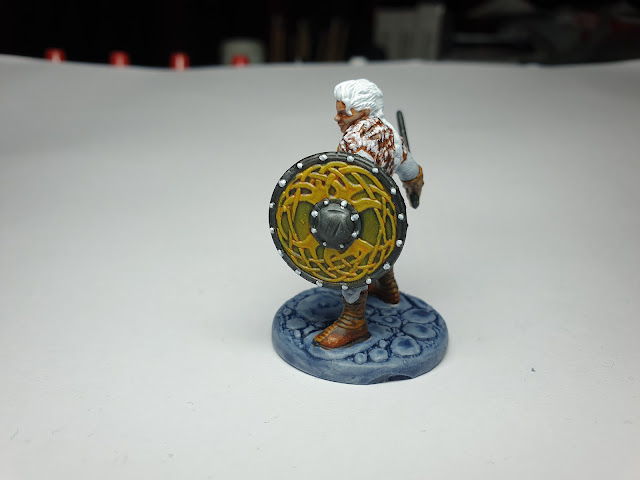 It didn't work out like I imagined it in my head. Or maybe that's just because the first photo is after the Strong Tone wash and that muddied the whole thing. Not sure. The only colour that was actual paint was the green tunic and pants. They were AP Elf Green which is quite a nice earthy tone.

I look back at these two photos and think, maybe I should have just stopped there. But we always wonder that after it's too late. :) haha 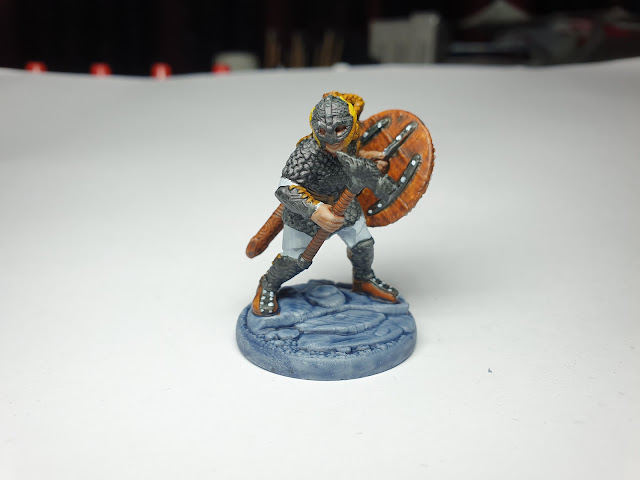 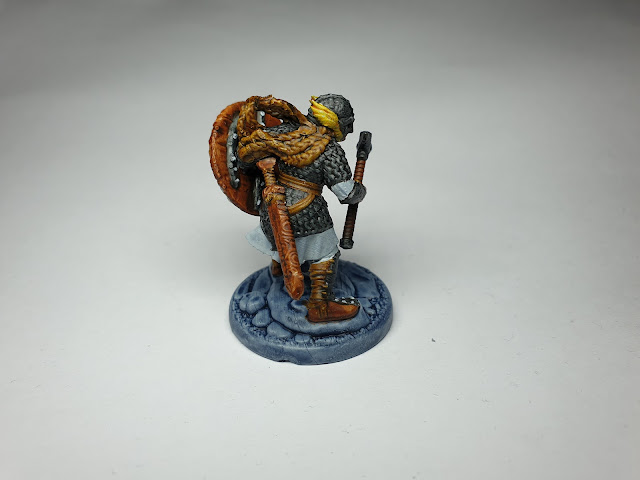 The one thing I noticed after printing these is that they are big miniatures. I don't have a metric ruler handy, but they feel like the bases are 40mm, and they are tall. They're not a lot shorter that modern GW AoS Orgres.

So I'm thinking that makes them doubly perfect for Ragnarok. They are the ultimate heavy metal Viking warriors. Larger than life and brutal as hell!

The other almost-finished work is a couple of Orc tents from Rocket Pig Games. 3D printed again. They were designed for 30mm-ish scale (I'm going to start calling things 30mm scale because nobody seems to decide between 28mm and 32mm, so I'm just calling it down the middle :) )

All of the orc buildings and terrain from RPG are fantastic designs. Most of the models from memory are hailed as not needing supports when printing. I'm guessing they're also designed for filament printers because they are big!

The tents were only two pieces--the roof and the rest of the building. And at 30mm scale, they just didn't fit in my printer.

No problem, I thought! I'll just scale them down to 33% and they'll be 10mm, perfect for Warmaster! And they really are. They came out really well. 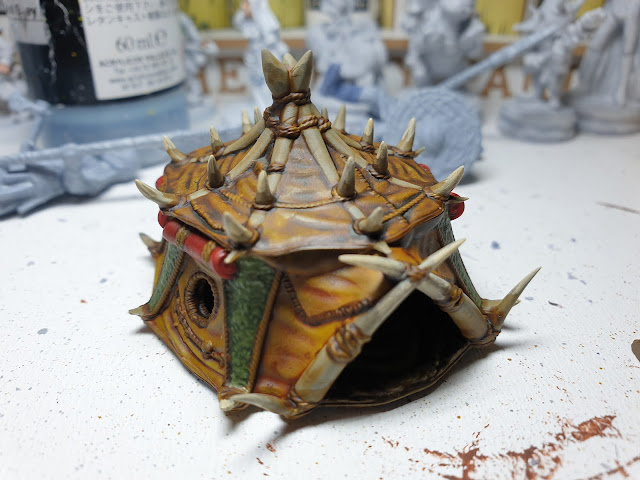 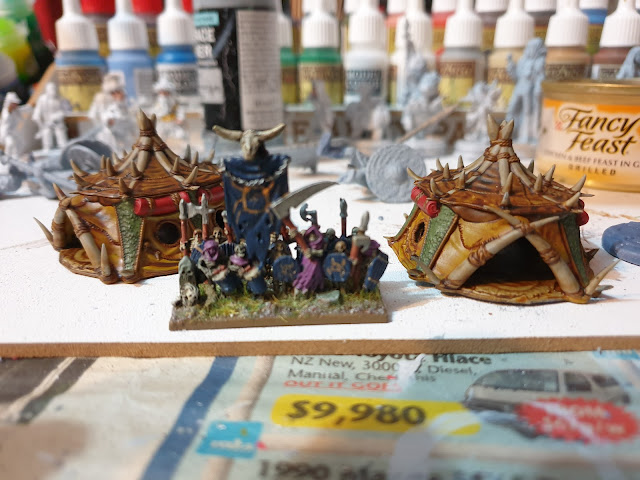 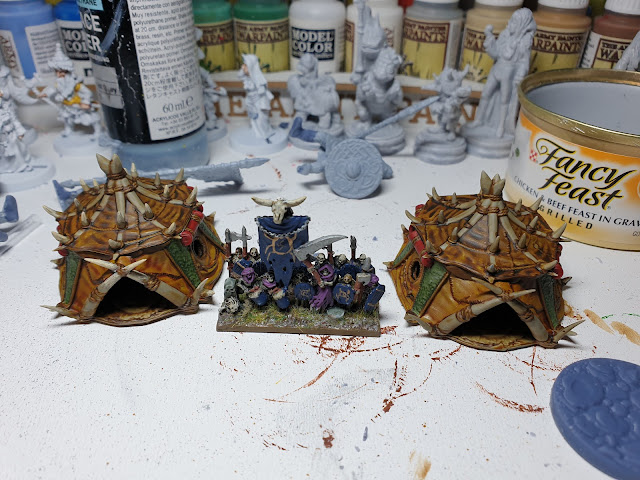 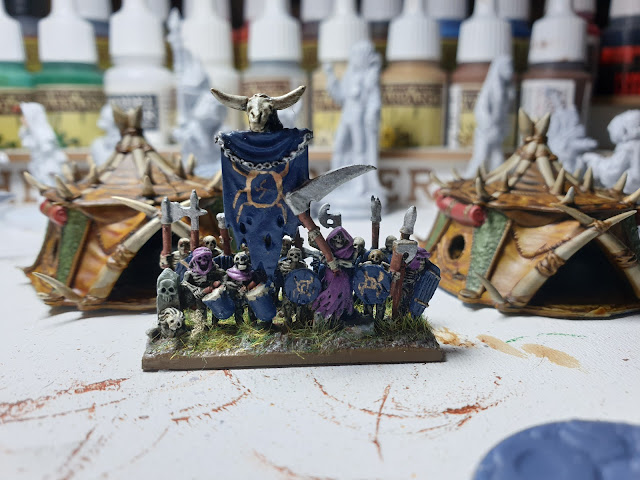 Again, mainly done with Contrast paints, but I'm bringing out the highlights in the horns which you might be able to see in the first pic.

I've got a bunch more orc buildings and terrain from Rocket Pig Games which I'll print in the future.

I don't actually have any Warmaster Orcs, and this made me think I should get some, but looking at this tent, it'd honestly be fine for Chaos, for which I do have a Warmaster army. :) And that reminded me I had recently (um, within the last 12 months or so) been gifted some Chaos figures still in blisters, so I've just glued them to sticks ready to paint.

So my queue currently consists of (in no particular order except my memory):

Plus I'm waiting on delivery of the 2 Kings of War starter boxes, some Lord of the Rings figures from Mithril Miniatures (they'll get their own post when they arrive because I'm quite excited about those), an airbrush compressor, and probably other stuff I've forgotten.

Because if there's one downside of working from home, you spend a lot of time on a computer with a credit card within arm's reach.